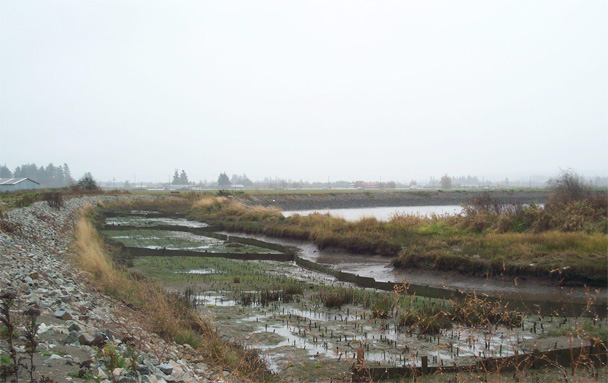 This project was undertaken for a Lower Mainland Municipal Government in order to attempt to determine why the marsh area that was disturbed during dyke re-construction had not been successful at naturally regenerating the marsh plants. Test plots were designed and monitored for almost one year to determine which combination of: elevation, soil type and plant species namely- Carex lyngbyei, Scirpus acutus and/or Scirpus maritimus, are most successful at the study site to make a recommendation as to which treatment type would be best used to restore the marsh habitat at the site. As a result of the test-plot study, it was determined that the elevation of the marsh restoration area would need to be increased and river sand used to allow effective drainage after each tide cycle. A temporary retaining wall was constructed to hold river sand in place until the 1400 plus plants planted in the restoration area established root systems to hold the sand in place. MarLim staff completed all planting of the marsh plants.

Project Team: A senior biologist conducted the initial site assessment and oversaw all stages of the project. A biologist and technicians completed channel restoration works. All reports were signed off by a Professional Biologist.