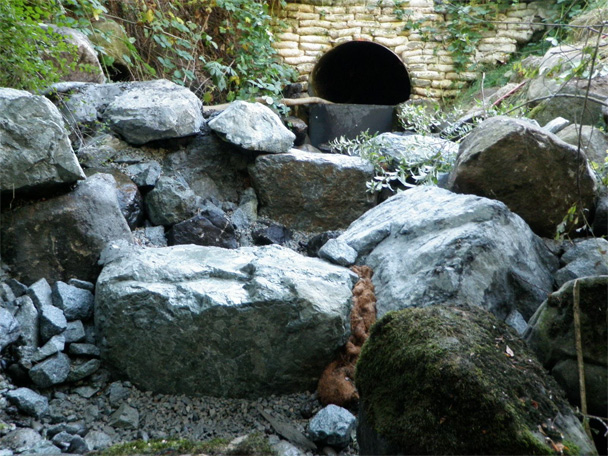 This has been an ongoing project which started in 2009. Repair work was done on the culvert located underhighway 99 in 2009 and 2010, part of which included relining the bottom of the culvert with concrete. This relining created a smooth bottom with no places for fish to rest, and also appeared to increase the speed of water flowing through the culvert. These changes reduced the ability for fish to pass through the culvert. A debris grate had also been installed across the inlet of the culvert to prevent debris from clogging the culvert, but this prevented any downstream flow of natural organic material, which is essential to downstream fish habitat. A series of activities were proposed to improve fish passage both into and through the culvert and increase the quality of the fish habitat: concrete baffles were installed inside the culvert to create pools with deeper water and slower flow for fish to rest. Rock/boulder weirs were installed at the culvert outlet to create pools that will allow access into the culvert. A section was cut out of the debris gate at the upstream end of the culvert to allow some woody debris to flow through the culvert, and large woody debris (LWD) was installed upstream of the culvert for habitat compensation. All designs for baffle, LWD and weir installation were created by Mark Gollner from MarLim Ecological Consulting Ltd. Riparian planting of native trees and shrubs was completed in October 2011 in a 120m2 area to compensate for riparian impacts that occurred during construction.

Project Team: A senior biologist conducted the initial site assessment and oversaw all stages of the projects. A biologist/technician completed ISW notifications and permits applications as well as construction monitoring works. All reports were signed off by a Senior Biologist.

Project deliverables: Detailed reports, AutoCAD drawing of the proposed restoration, photo documentation throughout the project, and continued monitoring of the stream to assess effectiveness of habitat restoration.